It's been a full month of school and I wanted to update on how Jax is doing.

He LOVES school.  School was made for him.  He loves the structure, the learning, and his friends.  His favorite part of school is recess.  They are already reading and he is on book 3.  I'm really proud of him.  Letters have always come easy to him so I'm not surprised that reading is fun for him.  Which makes life so much easier when he loves it.

He has a group of friends that he plays with at recess.  He plays either Chima or Skylanders.  Funny how the all the boys love the same stuff.

School here is pretty rigorous.  They only have 1 recess a day.  I'm freaked out by that.  I think Kindergarten needs at least 2 or 3.  They really push the reading skills.  The state mandates tests the first month of school and Jaxson didn't score so well on phonics sounding.  Which is odd since I've worked with him on this during Tot School.  Which shows me that these standardized testing is really just for the birds.  I took those test results and threw them away.  They weren't accurate and if my son really had a problem he wouldn't have been one of the first students to receive the sight word readers in the class.  'Nuff said about that.

I'm glad that we will be moving out of this school district this month.  I've heard the school district that we are moving into is a lot more relaxed and that makes me feel so much better.  More recesses, less testing, which in my mind, equals more fun.

Cause this was his homework one night: 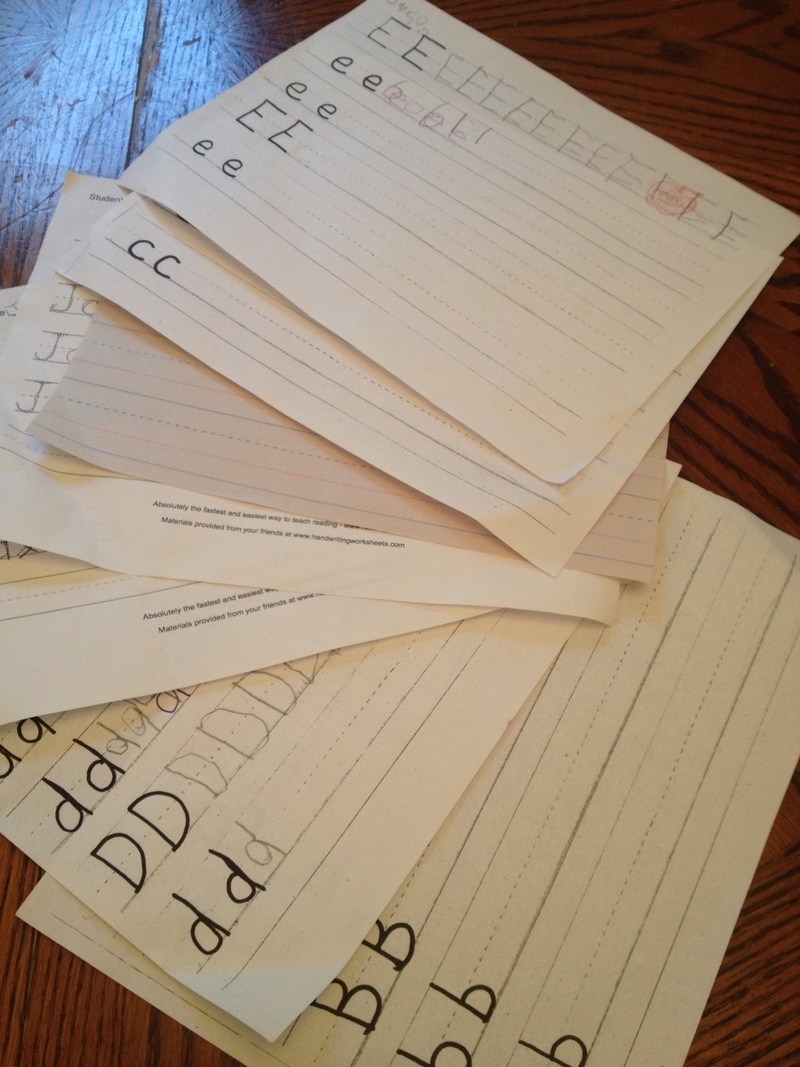 Seriously.  Does he really need to do ALL this writing?  Right now?

Jaxson also had his school pictures taken.  He told Justin and I that he was going to pose like this for his picture: 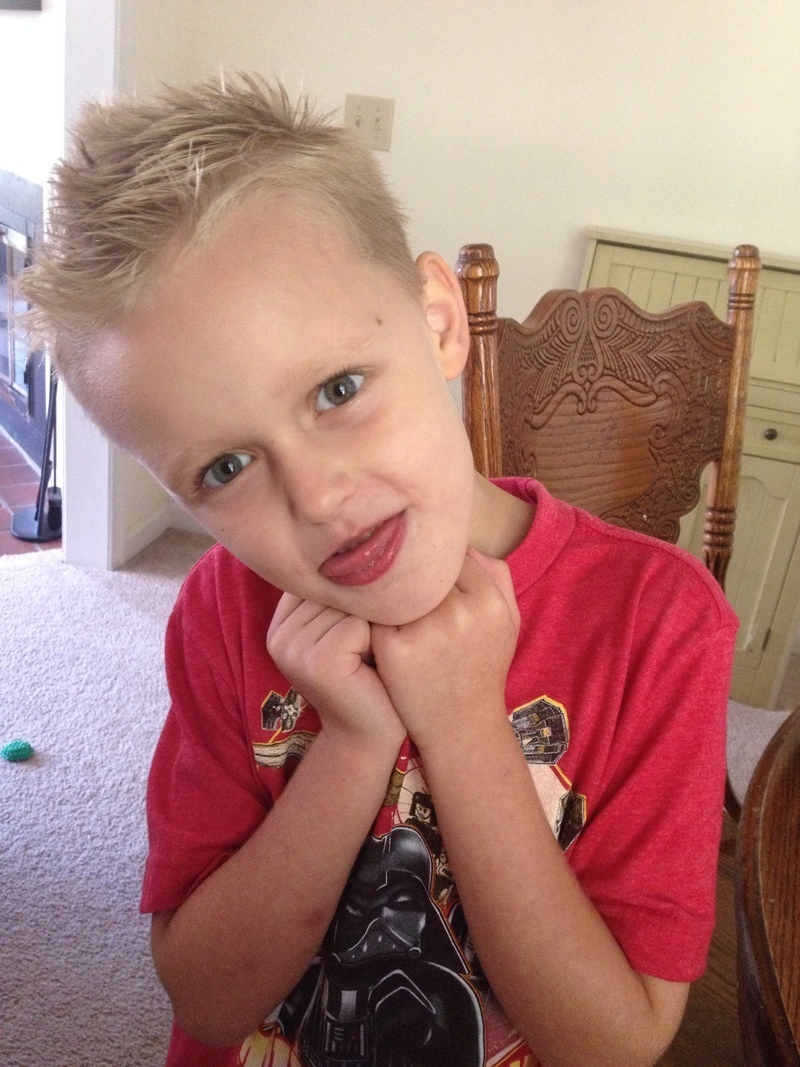 Luckily, he really didn't and his school pictures turned out normal.  Whew!

Now that Jaxson is at school, Julie just assumes that I want to play with her all day long.  Today, we played Minnie Mouse. 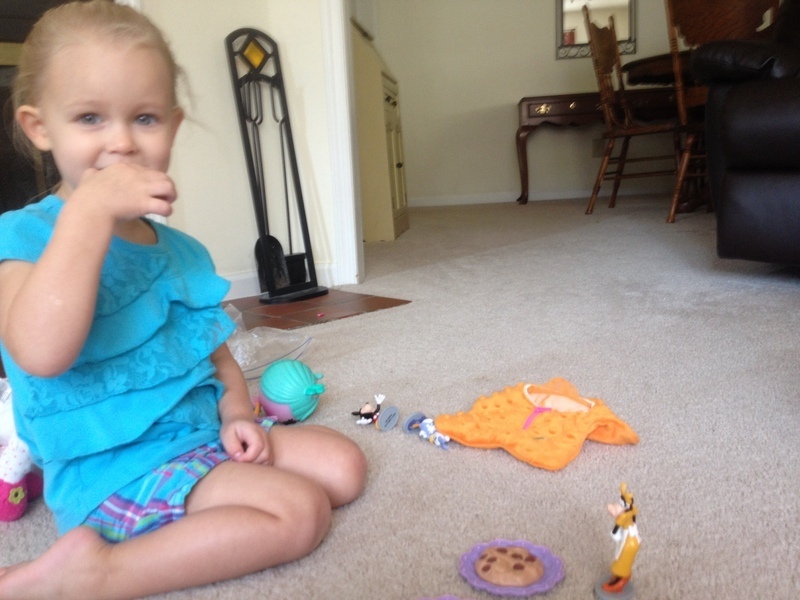 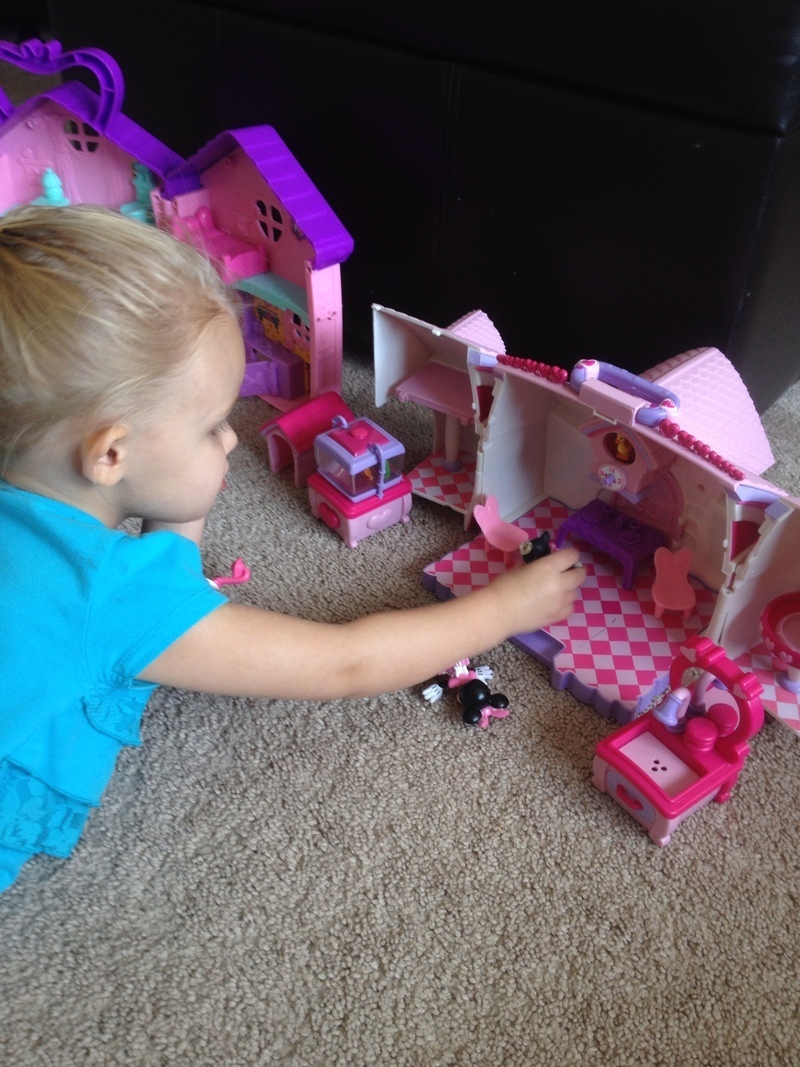 It was a mixture of a tea party with momentary lapses of "Bad Doggies" messing up Minnie's House.  I guess a two year old can imagine so much. 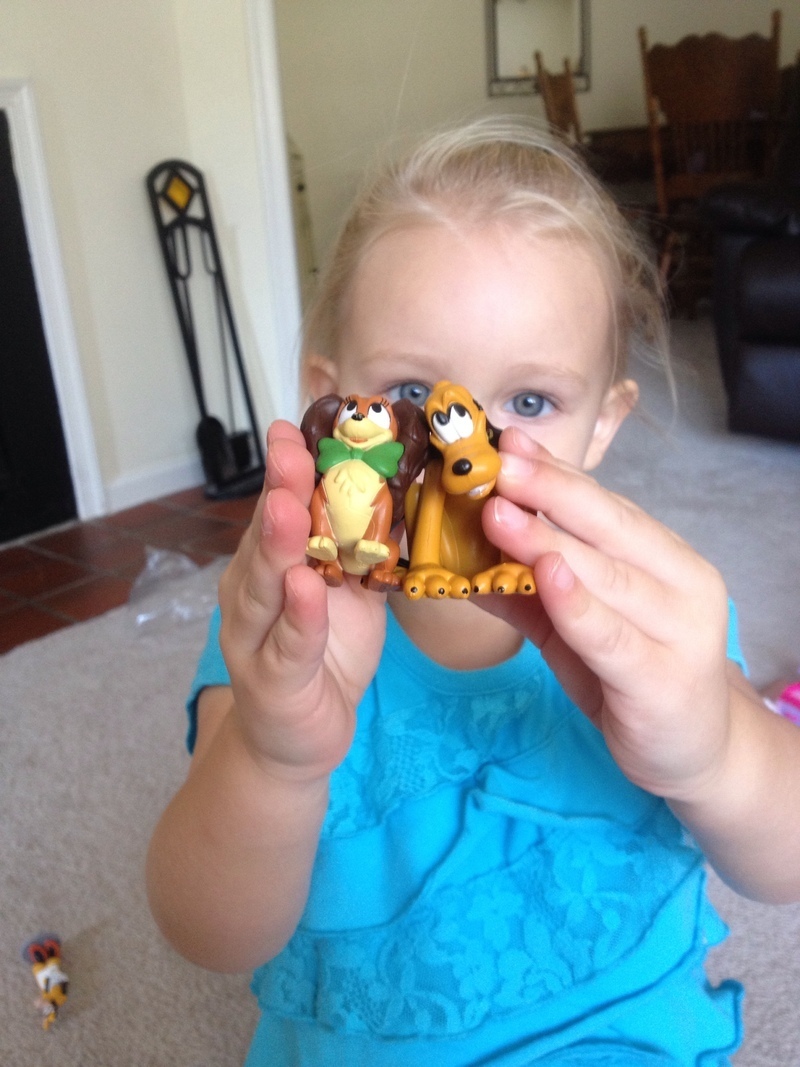 These doggies (Woof-Woofs) were bad.  They were put in time out a lot.  They liked to tease the kitty.  Justin and I have figured that Julie has quite the affection for cats-not so much for dogs. 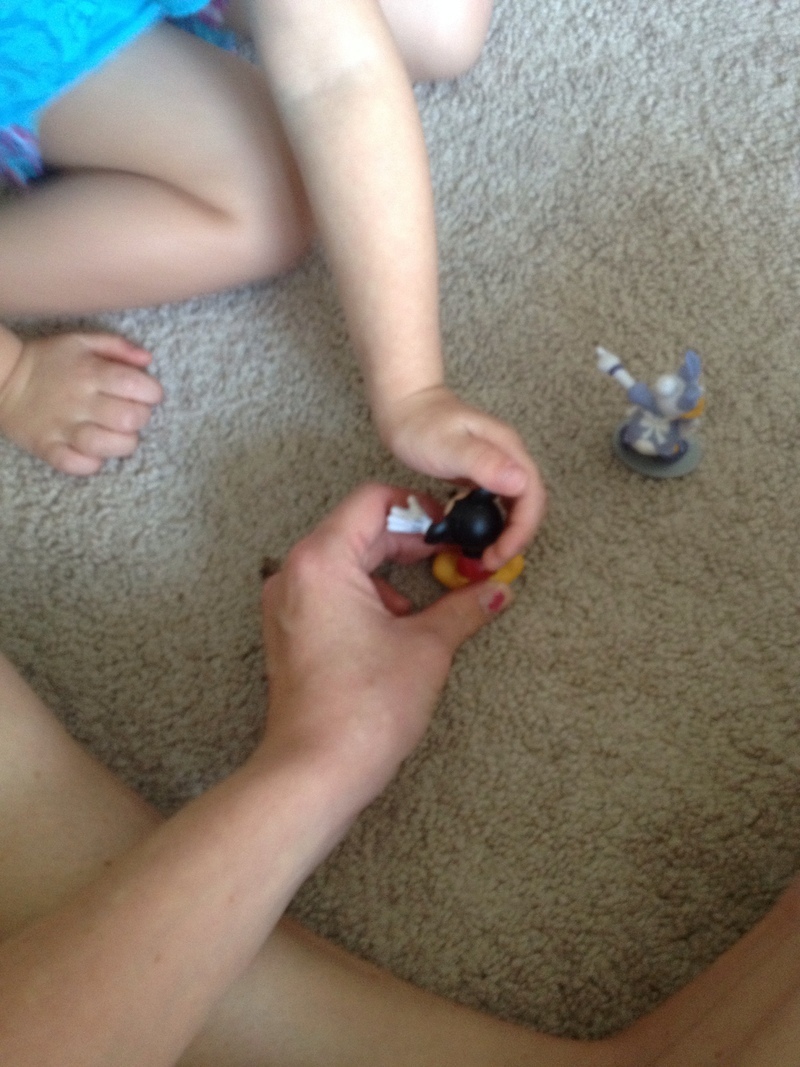 At one point, Julie had me playing Mickey and when "Mickey" asked for Minnie, Julie brought out her pretend phone (aka hand) so Mickey could talk to her. 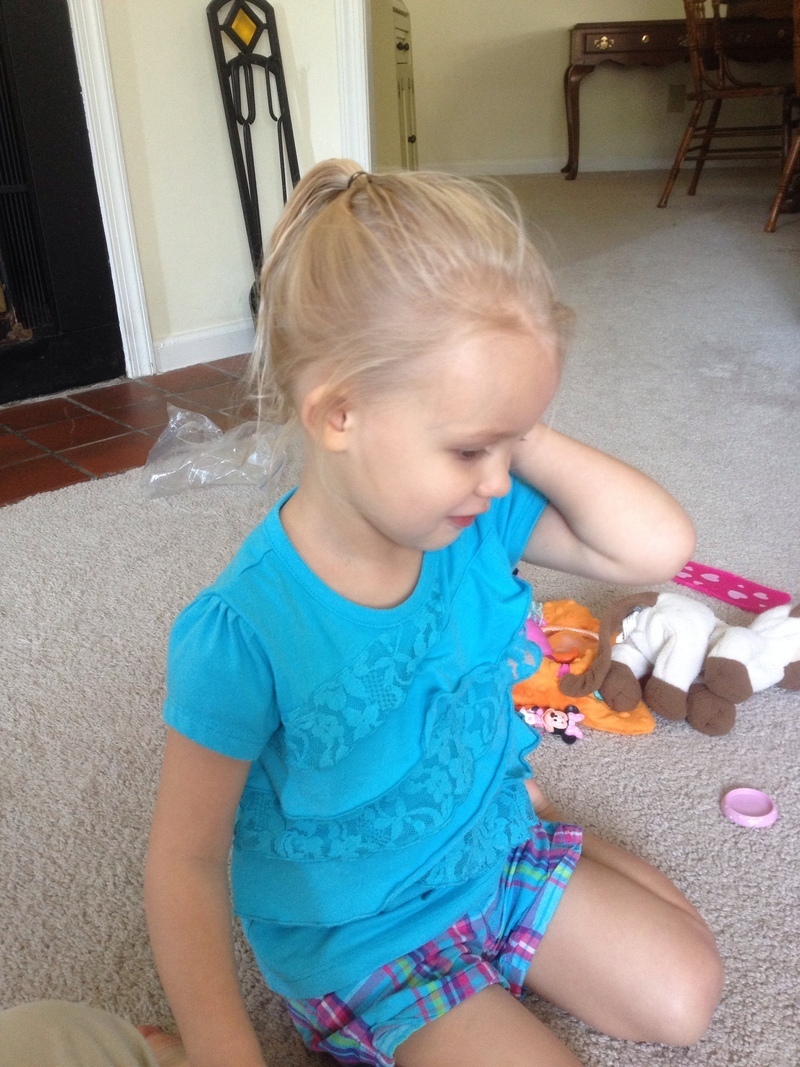 Julie talked to Minnie too.  Which I was glad to see that Julie doesn't require an iPhone...yet.

It was fun playing with her.  Often times, I get so focused on my to-do list that I can miss these little moments.  There's nothing like playing Minnie Mouse with Julie!

I feel that Julianne grew up so much this month.  She's talking up a storm, making jokes, and wants to be the center of attention in anything that goes on around her. 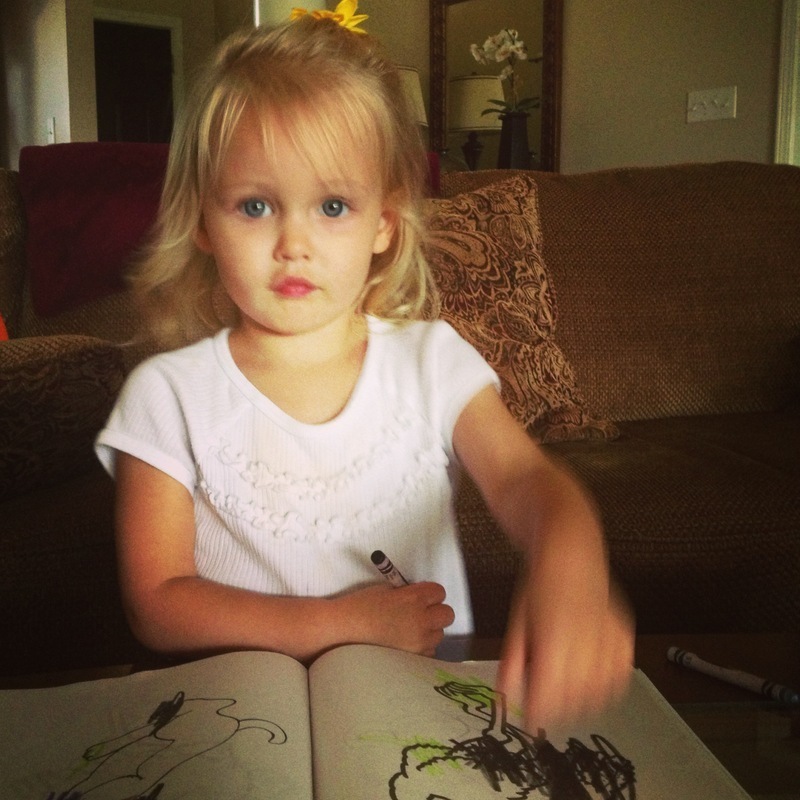 Her most frequent phrase is "Mama, wat dis!"  (Mama, watch this!)

Alma, my mom, visited this month and Julie was pampered each morning with make-up and lotion.  Alma pretended to put the make up on but Julianne just ate that up.  And she had her nails painted the very first time and she was so tickled by it.  She would show anyone who would talk to her-her pretty nails. 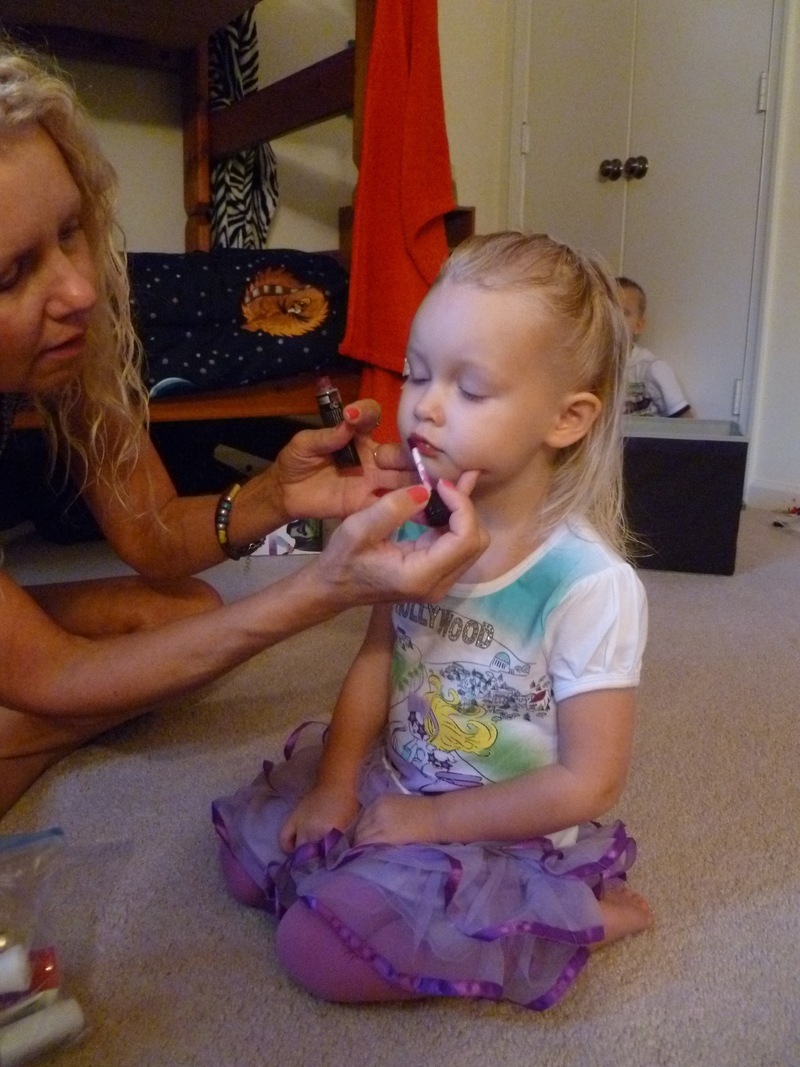 Julianne is particularly found of Jaxson getting time outs.  She will say to me "Boy bad.  Me nice." She will also try to boss him around which I have to tell her she is not the parent.  One day, Jax was acting out pretty bad and I warned him that if he acted like a baby he was going to sit in Julianne's high chair.  Sure enough, he tested me and so I had him sit in the high chair.  Julie that that was hysterical that "Boy was a baby." Even she got the message.  And I have to say, that did help on his behavior.

My mom and I took Jax to their very first Disney Live show.  It was Jake and the Neverland Pirates and Princess Sofia.  Julie ate that princess stuff up.  Disney KNOWS how to market to a two year old. 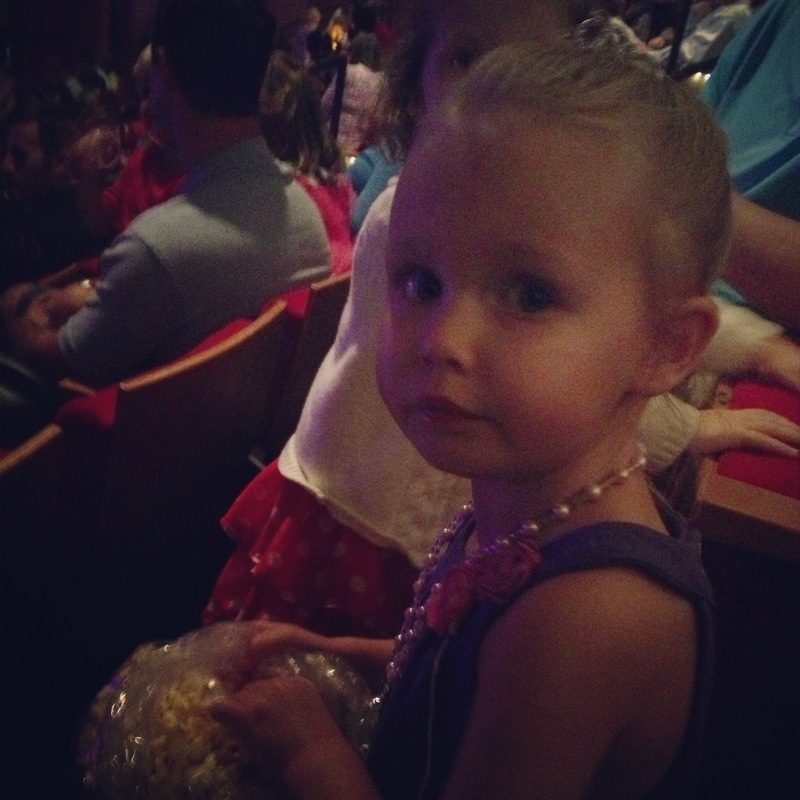 I love her prayers at night to God.  I will usually pray something first and then she will follow up with her prayers.  She prays for all sorts of things...Alma, Meow-Meow, turch (chuch), and her babies.  It's fun to hear her each night.

She is really, really afraid of the dark now.  In addition to having a night light we also keep the light on until she goes to sleep.  This is a terrible habit, I admit but this is not one battle I want to fight just yet.  And she still falls asleep fast.

Our conversation at naptime today:

I was tucking Julie and Meow-Meow at naptime.  I asked if everyone was happy being tucked in.  She said, "Yes.  Happy Meow-Meow.  Happy me."  Aw, so cute!

While staying in a hotel in Nashville, Julie appointed the closet to be her "room."  I'm not sure why, but she put all her toys in there and then would sit in there and play. 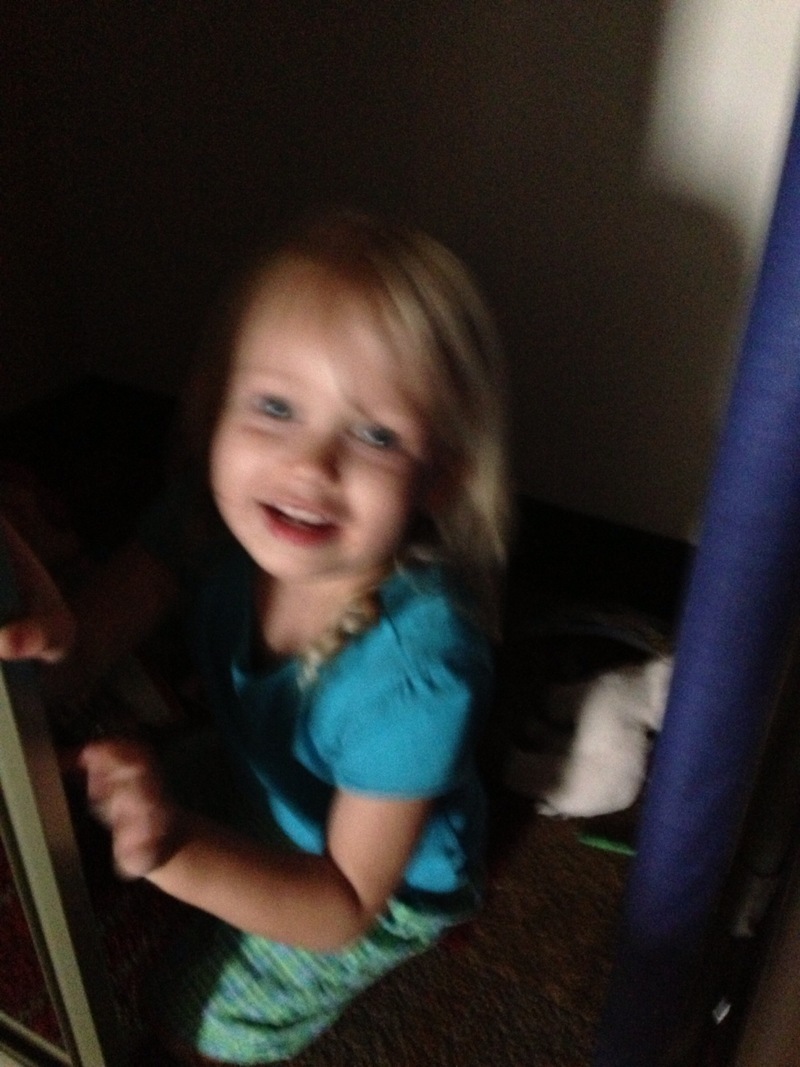 She loves puzzles, just like Jax did.  One day when Jax was at Kindergarten orientation, we did puzzles for 1 hour and 10 minutes.  I was so sick of puzzles by the end of that hour.  But she had a blast. 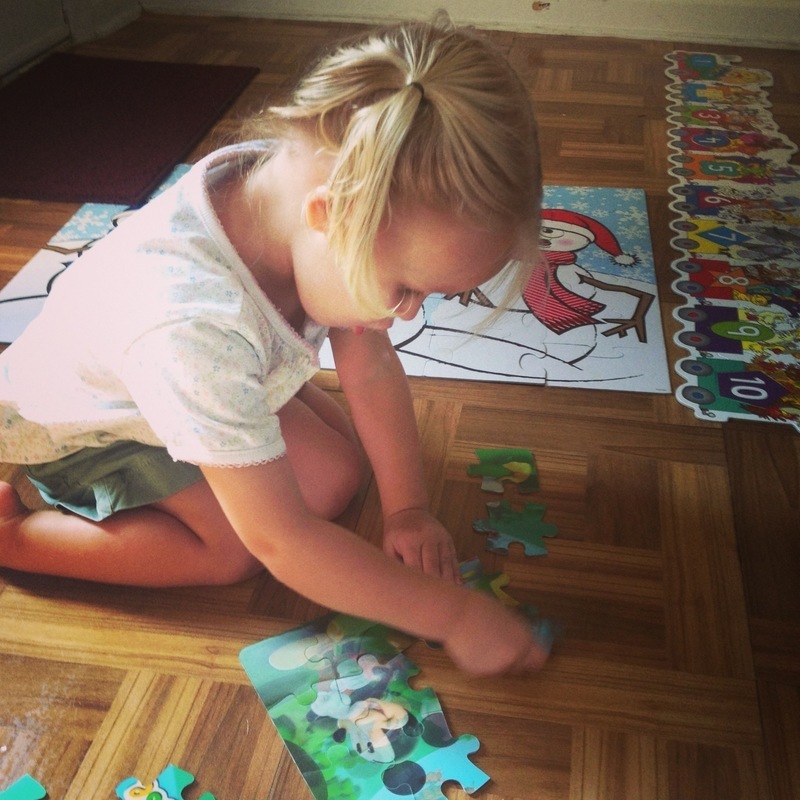