Well, we had an ice day over a week ago.  And now we had snow!  We got out of school on Monday around 1pm and haven't been back since.  I guess February is giving us a taste of what winter should really be like!  I don't mind it though. Even if we will be going to school until July 4th!  Ha! 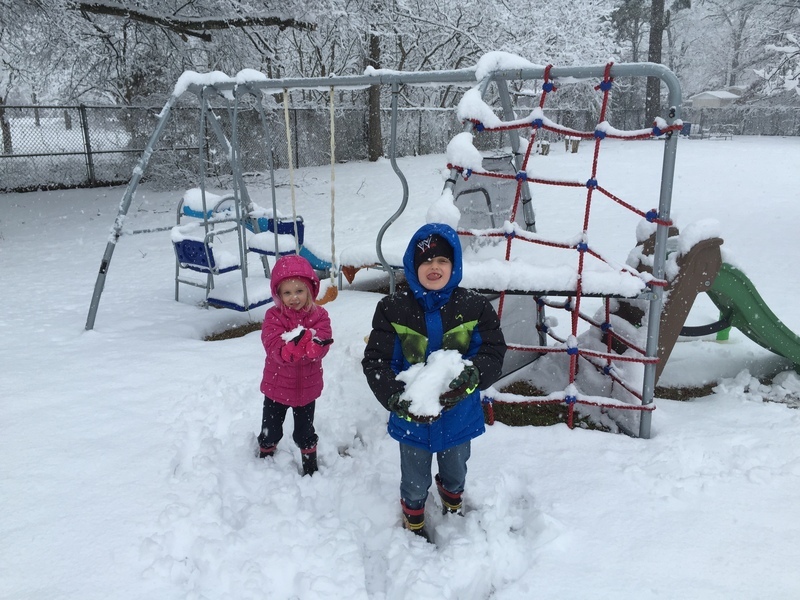 This was the most perfect snow ever.  Fluffy, wet, and easy to make snowballs with! 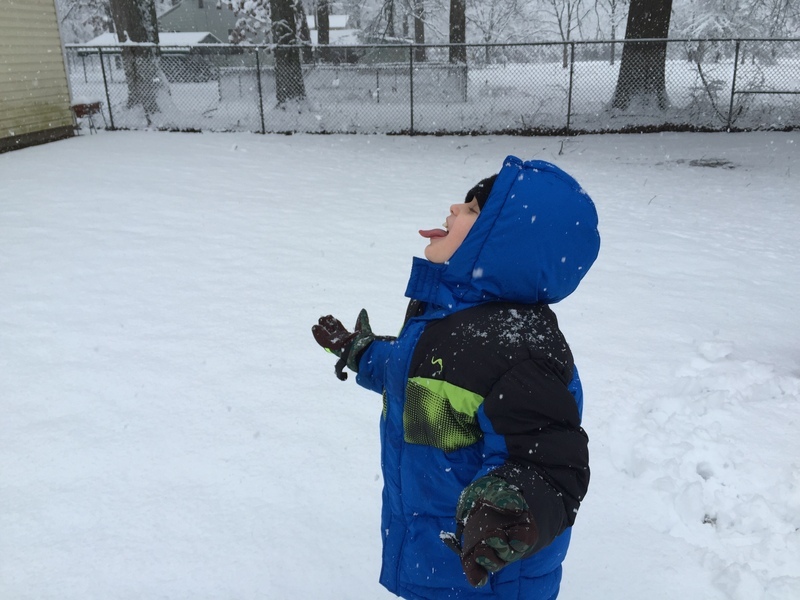 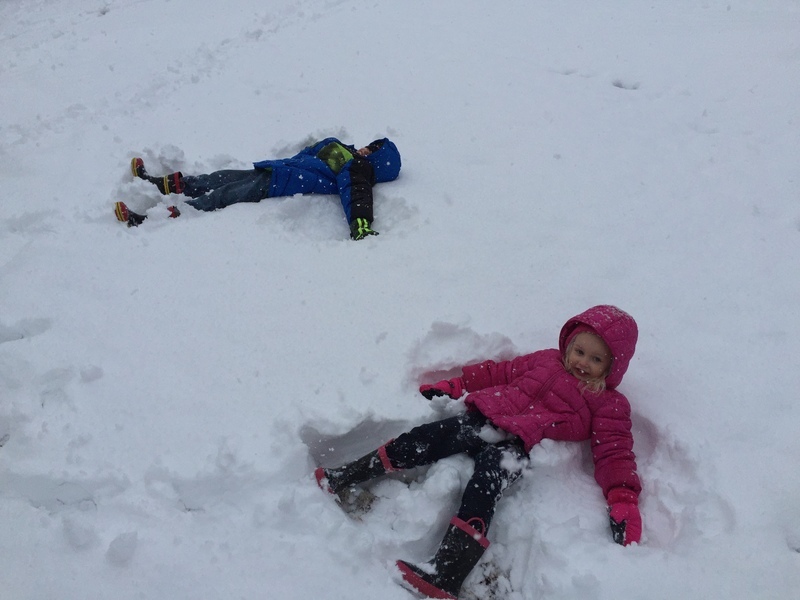 The kids each had to make their own snowmen.  They were really proud of them! 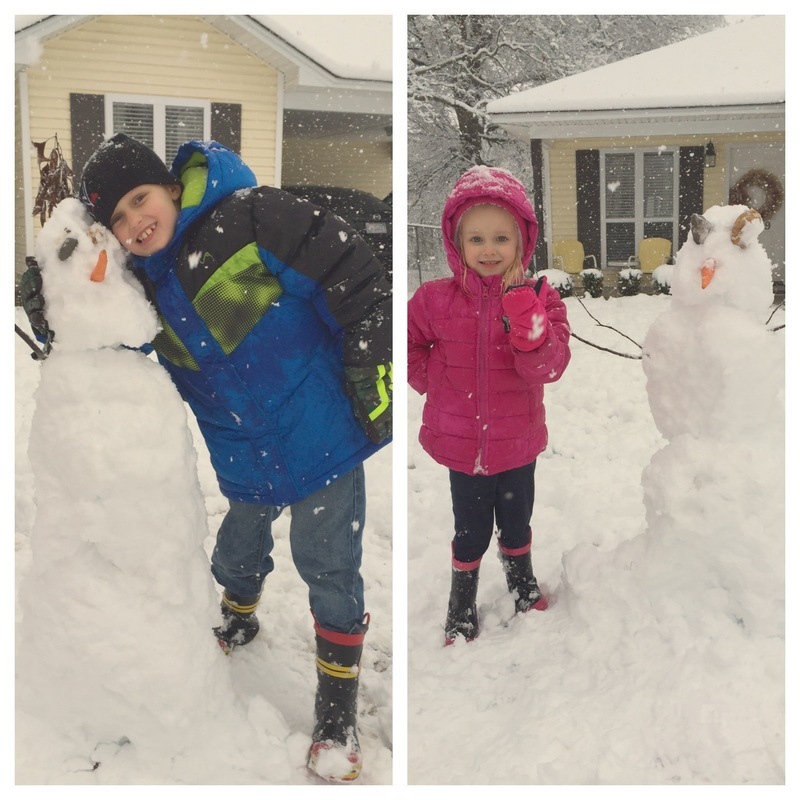 It was a fun day.  I enjoyed sleeping and watching some daytime TV.  I never do that.  But when you can't go anywhere or do anything, I can justify watching Dr. Oz and Jeopardy.  I had fun playing outside with the kids.  It was great because once we got cold, we came inside for some hot chocolate!

We woke up to sleet and freezing rain this morning.  This ice storm had been hyped up all week and you just never know if what they forecast is really going to happen.

So when the kids woke up this morning, they were so happy to see snow!  They couldn't wait to build a snowman.  I had to bring down their hopes a bit by letting them know it was sleet and ice-not snow. 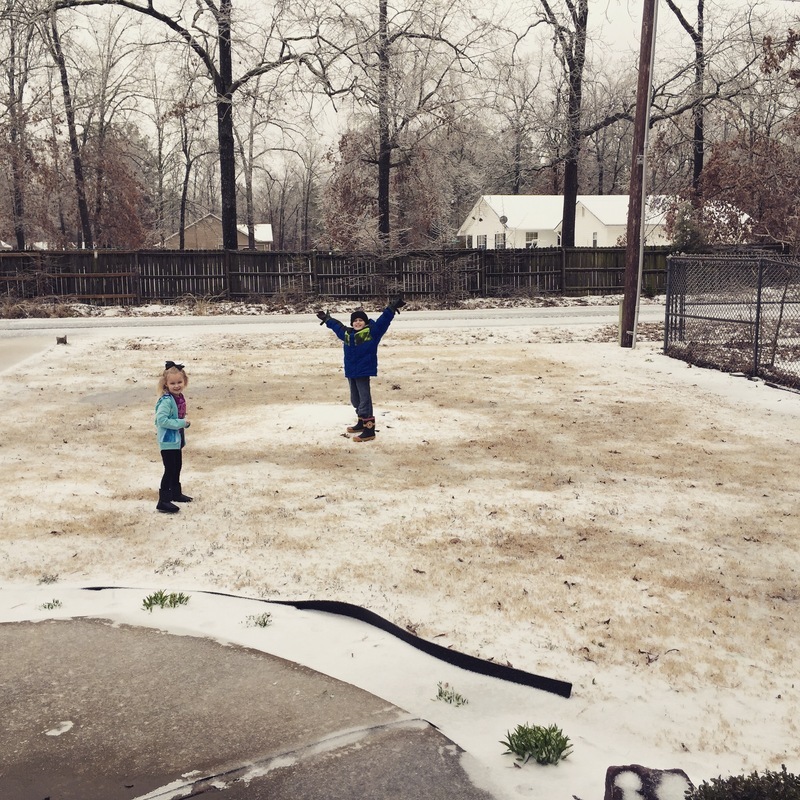 But you know what?  Jax didn't mind at all that is was ice.  In fact, he enjoyed sliding around and hunting for big icicles. 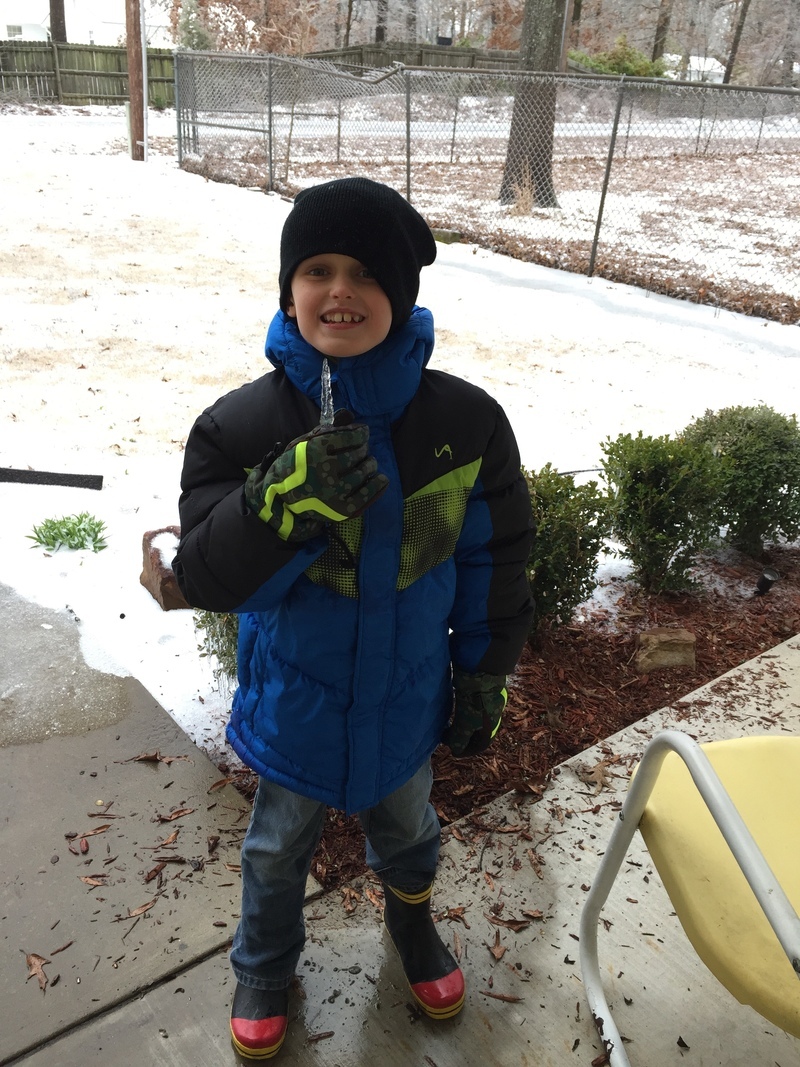 The kids begged that Justin and I go out, so we promised we would after lunch.  But brrr....it was so cold!  Ice was everywhere. 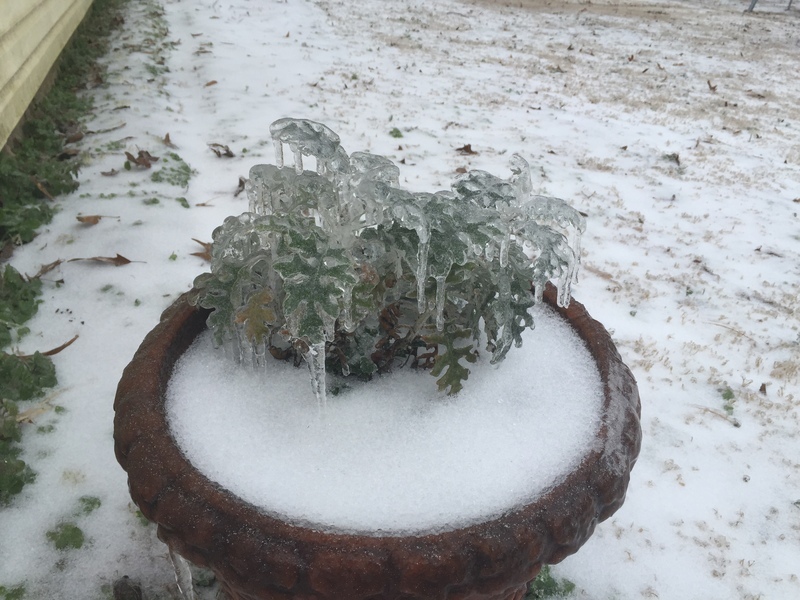 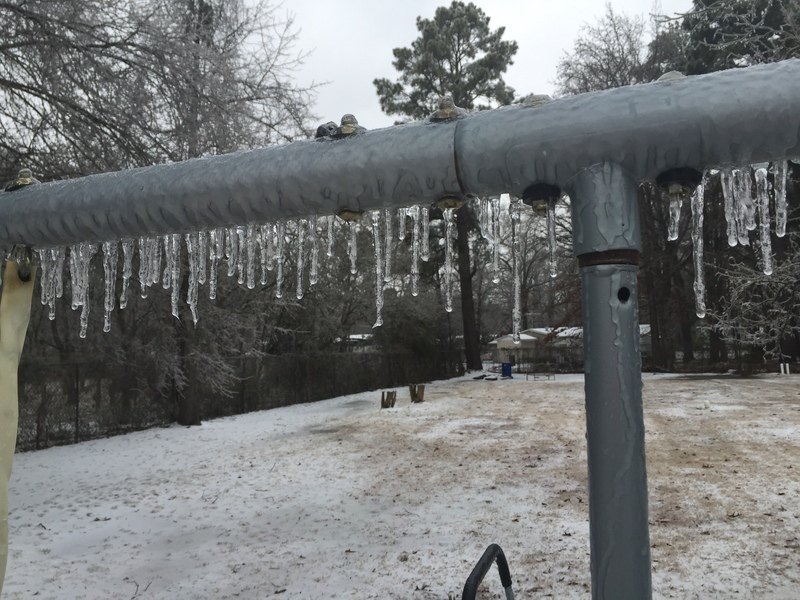 And the trees-boy were the tree branches heavy with ice! 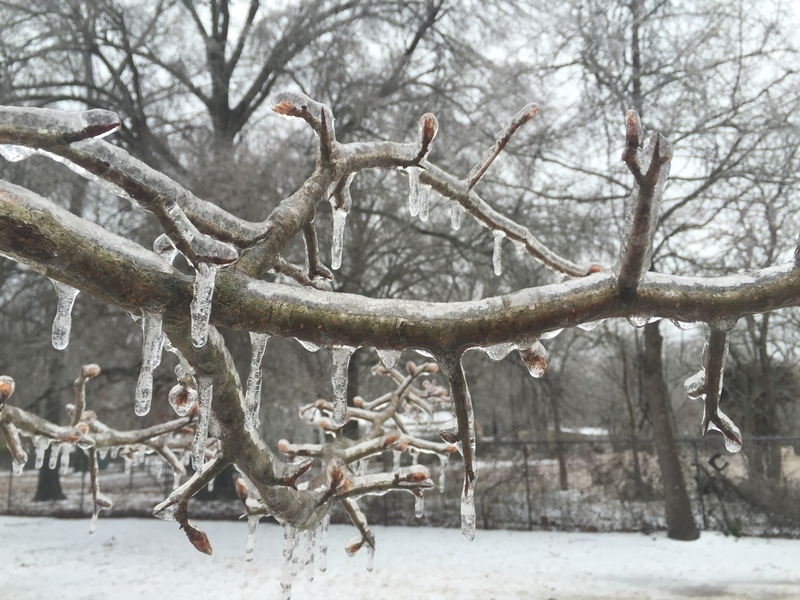 And poor Julie.  She wanted to play outside.  She wanted to like the ice and enjoy it like Jaxson did.  But it was just too cold and too wet.  And when her boots somehow got ice in them and her mittens were a little wet-she gave up and went inside where it was warm.  I don't blame her cause I followed along right after her!

School was canceled today.  I woke up and saw it had been canceled and imagined that it was a winter wonderland outside.  I was very disappointed to see rain falling down in sheets instead.  I am so not used to the South canceling school "just in case."  Back in the olden days when I was in high school (in Washington State), one night it has snow 17 inches and the school district delayed our school by only 2 hours!  People were slipping and sliding cars off the roads and we still had to go to school!  So it's always weird for me to cancel school without any proof of icy/white stuff.

But by 8am, the rain had really started to turn into freezing rain mix and was icing up the trees. 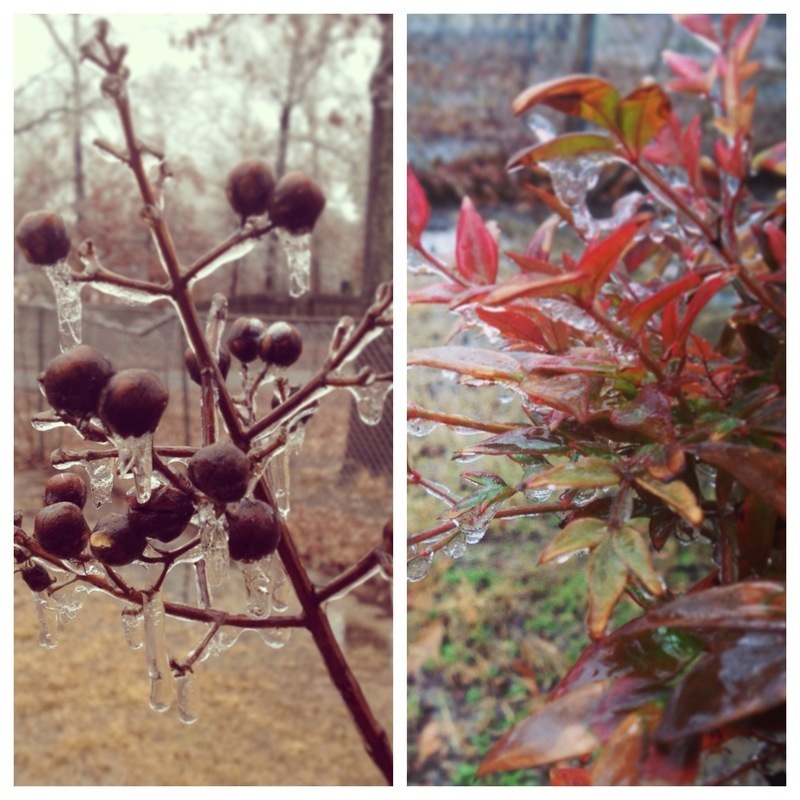 So here's my tangent:  Didn't I move to the south?  Isn't supposed to be warmer down here?  What gives?

Also, my Dark Sky app is worthless in Arkansas.  It worked great in North Carolina.  But here, it's just a mess.  There was not a point at all today when we had "heavy snow."  This is what made me think there was a winter wonderland outside when I woke up.  Dark Sky-you failed yet again. 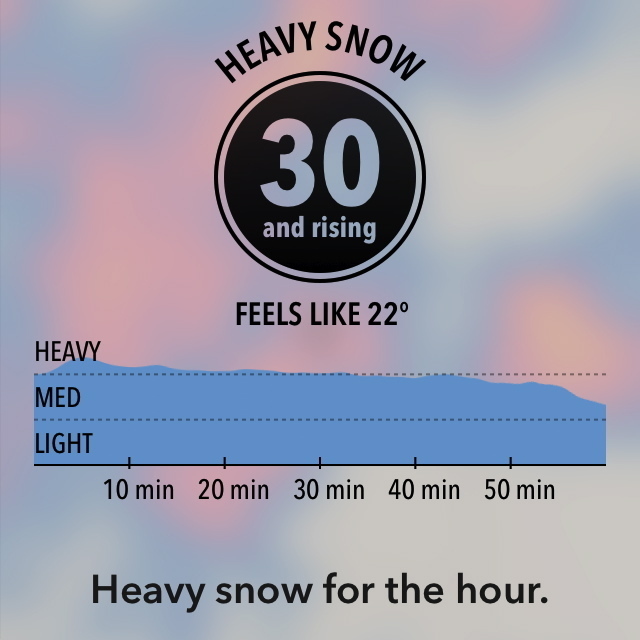 Jaxson was sad that school was canceled and really didn't believe me.  It was only when we drove by his school while doing errands and saw there was not one single car in the parking lot.  He finally believe that he wasn't missing out on anything at school.

Later on, the freezing rain turning into rain and instead of worry about icy roads, I was more concerned about hydroplaning!  Some roads were completely flooded!  I'm pretty sure that our burn ban is no longer in effect.  Cause my backyard looks more like a lake and if my kids want to play on their new swing set, they are going to have to swim to it!